Autumn on the farm

Autumn has come to Hungary and particularly our little farm. Gone are the days of walking around in a t-shirt and shorts and the old warm jackets have made their annual migration to the the top of the coat hanger. To be honest, we can't complain, during the day the weather peaks around 17°C and only at night can you feel a brisk breeze.
Here are some photos of things going on in the autumn coolness

Samm's fancy andriod phone can take 3D pictures which are stored in the fancy mpo format. However, using some fancy C code from here and imagemagick, these images can be animated as gifs. the wonder of this is that it sometimes capture the 3d vibe of the original image.

For a while, it feels like the farm is a monster project which sucks the life out of us and that much is invested and little recuperated.
However, recent work hopes to break this trend. We've had two new fenced areas installed, one for the dogs and the other for our livestock. 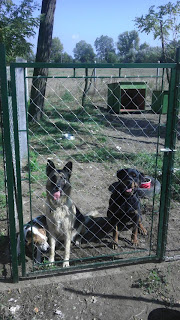 Our dogs are masters of escaping from our inner garden and enjoying a chicken take-away at our neighbours' expense. So, to prevent them from being shot, we've built them a new areas. The new doggy den is large enough to enable them to roam around and secure enough that we don't have to worry about the awkward phone call from the neighbours. Also, they now have fancy new houses too :) We are also getting another fence installed across the garden which will give them a secondary running area.

The livestock area is now out-of-sight of the Crunchy the Destroyer and there are two sets of fencing separating the animals. the big plan is to have an rrea for goats, chickens, pigs and rabbits. The current residents include Piggy, one Rabbit and 3 Goat (1 billy 2 girls) which we are we are goat-sitting a neighbours' flock. We will be eating Home-made cheese for weeks :) 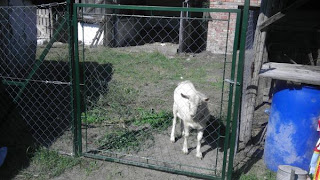 I've not been playing with a iPhone/iPad/android thing during a church service but I've been experimenting with ways in which I could mix-up and change the sound of worship at our local church in Szeged. For the last few years, most of the music has been me bashing out songs on the acoustic guitar. Recently, some new musical toys have encouraged me to branch out into new areas.

I acquired a  line6 POD 2 whilst I was living in Bristol. I bought it at the same time as a massively discounted Crate powerblock and the idea was to use it for practising with headphones and trying to make sure my hearing lasted into my 70s. The big red kidney is great as it does a good clean, gritty and distorted sound which is quite easy to record for demos and the effects are ok. For most small venues, this things is perfect and it means i don't risk a hernia lugging the marshall stack in and out of the car. ( I do need to buy a footswitch :) )

The Next weapon in the armoury was getting a looper pedal - I settled for a Jamman Stereo pedal. This was a good compromise of features and price for an unknown effects pedal. I didn't want to spend £500 on an expensive paperweight. I've been overall impressed with the pedal - the mike/guitar input is great, a button push is required to switch to aux input. Live looping is a bit limited - You can only add/remove the most recent overdub but there is seamless switching between prerecorded patches. So this is the ideal pedal for me as a "sound triggerer" rather then a multi-textured in-out looper

The icing on the cake was the most excellent Kaossilator which is a crazy synth toy the size of an old fat iPod. The trackerpad panel on the front of the device acts the input device with pitch controlled by left/right motion and timbre by up and down. There is a mini-loop feature which is nearly useful. The number of sounds on the 'lator is impressive and some of them are usable. The killer feature for me is the number of drum kits and pre-programmed rhythms. One slot on in the memory has various drum patterns which makes it easy to create beats which have natural fills and feels so you don't sound like you are playing with a drum machine from the 80s.

So, I've tried combining all this tech and last sunday, I tried two songs at church with a prelooped drum and bass section whilst I played electric guitar. The first song was a new song from a youth camp which originally was a bit rocky so i moshed out the guitar and had a mellow drum and bass rhythm for the chorus and verse and I had a "up" chorus consisting of some heavy double-bass drumming :) . Each section was on a different loop and I stomped my way between the sections
The second song didn't work so well. It was Light of the world but the drum beat was a bit too light and the singers got too excited and sped away in front of the beat.
Overall, the experiment worked I just need to tight up the rhythms and train the singers better :) I'll also try and post some of the tracks on-line for public ridicule.

Sorry we've not posted anything for ages but we've been busy with new building works and scheming about new animal plans. When we have some news we'll post it here :)

One of the things which I like about football is that the guardian usually does a report on important games/weekends with a summary of things which have been learnt from the event(s). So, in honour of that, I present the five things which I've recently learnt

I've recently restored an original Eeepc  to working condition by install lubuntu. I can't believe what a difference an OS version makes to the running of the computer.
Lubuntu is a version of ubuntu (the most popular linux distrubution) with a really stripped down windows experience (LXDE for those interested). The total memory usage for the windows manager is about 50 MB! All the normal progams work on the system and it is good for old hardware

I use Lubuntu on all my computers, I just like my computer to feel responsive and snappy and i'm not really interested in my computer looking flashy and sparkling and taking 10 mins to search/open a file

ARRRGH - I've turned into a middle-aged Computer user!!
Posted by Unknown No comments:

Our latest arrival to the farm arrived this week. We've finally managed to locally source a Lawn sweeper for our lawnmower. This simple device sits behind the lawn mower and picks up all the cut grass, twigs and assorted rubbish and lets us easily dump it in a place. I just need to learn how to reverse with a trailer. We also bought a Trailer with removal back plate and tipping function and a dethatcher which removes the dead trapped grass and moss from the ground. All this wasn't cheap but will hopefully make maintain our grassed areas better. This will also please Piggy as she gets all the clippings to chew and to make a bed from.
The Local shop were awesome. They assembled and delivered all the equipment for free and then gave us a discount as well! A big thumbs up from us
Posted by Unknown No comments:

Email ThisBlogThis!Share to TwitterShare to FacebookShare to Pinterest
Labels: Farrm

We've been trying to improve the quality of our farm. Our vegetable patch and orchard have been overrun with Sycamore tree and weeds particularly wild grape vines. We've tried to to do this by hand to no avail so we called in some locals to help. They recommended that we hire a JCB (with Driver) to dig out all the tree roots of dead trees, and to flatten the area which we want to be our new garden vegetable patch.
So, recently, The locals can and cut down all the weedy trees and mulched them and our local friendly JCB man came and uprooted all the trees. He also leveled our veg patch and used the remain sandy soil to level out our main garden bit. This means we have loads of fire wood, a larger area where we can mow without fear of breaking the lawnmower and we've a new flat level for growing veg. These photos show it all off

Two Steps forward, One back

I'm now at home on the farm trying to do some stuff and today has been a day of good and bad stuff.
The Good stuff


Bad stuff
Some progress is better then no progress and still feeling the happiest I have for a long time
Posted by Unknown No comments:

Dumbing of Ages is a webcomic which i am particularly fonder of. I mainly discovered it from reading shortpacked.com.
The current story is about the characters going to to church (in between a running plot) and their reactions to it.
What strikes me the most is the way that the Author seems to have experienced the conflict between church/God and the church not being the place where anyone can come Unfortunately, I would say that this

(http://www.dumbingofage.com/2012/comic/book-2/02-choosing-my-religion/avoid/) is the most common experience that the people have - But I'm trying to change this :)
Posted by Unknown No comments:


Who would have thought that Gene Simmons could speak Hungarian so well? Who else knows what else lies behind the Grease paint?
Posted by Unknown No comments:

All Quiet on the Blogging front

There has not been a post for ages - Sorry!
This week there will be lots of updates as we are going to get one of our piggies butchered.
We'll have lots of meat as the pig is about 200kg!!! I'll post updates/photos/etc

Right off now to bake some fresh bagels to be served with fresh butter and fried eggs :)
Posted by Unknown No comments: