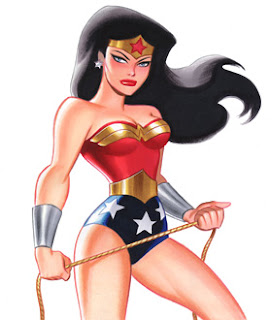 I've been watching loads of justice league unlimited(JLU) and thoroughly enjoying it! For those of you(s) who aren't geeks  DC comics have rebooted their universe (started from a Blank canvas again) and one of the comic review caught my eye. It basically said Wonder woman is one of the most important characters of the DC universe (Batman and superman making up the holy trinity) but there are no decent stories/comics with the classic tale which involves wonder woman. This kinda of idea creeps throught out the whole of the DC universe and eventually leads to the bigger question "what do we do with Wonder woman?" Do we make her into a female superman who is strong and tough but not superman, so he can save her; do we make her a man-hater a strong feminist or do we make her into the token eye candy(when was the last time you saw a flat-chested, non-curvy plain wonder woman)

Now you might think I am crazy to dedicate a blog episode to this but as I was thinking about these Issues, I realised that maybe these issues aren't super hero related but for all of womankind. Take for example sport, Woman athletics have to be glamourous for them to be taken serious Sepp Blatter thinks that woman's footballers should be more "femamin"(http://tinyurl.com/6z3mmxk). Beach Volley - Everyone watches because they love volleyball! If they did, indoor volleyball would be so much more popular and taken off.

This questing of the role of women in churches is another example - Every good pastor needs a trophy wife, but as long as they are not causing problem/headlines it is ok! Heck, we can even give a job which isn't that important! The The idea of a woman leading in a new direction is dangerous and what would happen if she had a new story ....

So would the real wonderwoman step forward and show us all the way?
Posted by Unknown

Email ThisBlogThis!Share to TwitterShare to FacebookShare to Pinterest
Labels: thoughts