Following on from my tweet today about mediation (here), I been thinking about defeat and bouncing back from this post. I'm not sure how I am coping with failures, how I (if I) pick myself up after another problem, set back or defeat. Maybe I'm too much of a scientist and not enough farmer, too analytical and not enough "next season will be better".


Today as I was preparing to repair my internal fence for containing Goats. My friend pointed out that the potatoes which I thought I have killed in spectacular style, with lack of water would actually produce new potatoes. Armed with a garden fork and shovel, We dug up our first potato harvest which were 100% organic free-range spuds. They were really tasty boiled as part of our lunch. 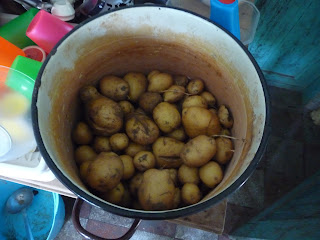