A month has flown by and the chicken have now grown so much that their initial boxes are too cramped.
So using the remains of old Computer boxes which we used to move here, I've built a little run for them in our boiler room. The glass jar with lamps in them are Zoli's great idea for keep them warm. The chickens can snuggle up next to the jar and feel the heat. Also, the specific heat capacity of the glass is higher then the air and less susceptible to cooling
At the moment we have 18 chickens - 10 bigger meat chickens, 7 laying chickens and one random chicken which a friend swapped out for a weak chicken when we picked them up from the shop. The birds which we have identified as cockerels belong to the meaty group. This isn't a great loss as Kakaspörkölt is very tasty. The birds  aren't fully fledged this should happen in the next few weeks and then they will be unleashed into the jungle which our garden. 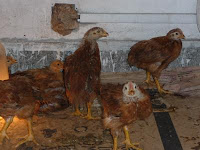 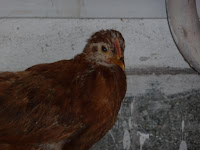 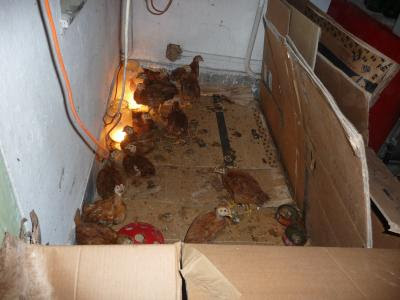